1. Stada and the Masochists

Last week, at Stada’s AGM, I claimed that Stada shareholders who support the current board must be masochists – a quote that promptly made it into media (e.g. Handelsblatt or Spiegel). You can find the full text (German) of my speech here. But lets start from the beginning:

Stada is a German generics company with horrible corporate governance and an activist investor (“AOC”) who wants to change the board. In many 100% free float companies, management and supervisory board don’t act as stewards of the shareholders money, but make decisions that only serve themselves. This is why I typically avoid investing in them. Stada is the epitome of a poorly run 100% freefloat company. The Former Manager Mr. Retzlaff, who built up the company, turned it into a vehicle to enrich him and his friends. He made millions in bonuses in years Stada didn’t perform; Retzlaff’s pension promises were in the tens of millions – among the highest in corporate Germany; his son entered the company straight out of university, was promoted to the board, earned millions and held responsibilities he shouldn’t have had within only 4 years working for the company. The list goes on an on.

Last Friday was the company’s AGM. The media coverage around the AGM was huge as everybody expected the final showdown between the current supervisory board and AOC. In my speech I criticized the corporate governance and urged shareholders to vote against the current board. It seems very obvious that Stada will create more value for shareholders if AOC takes full control, than it would if the previous system of poor corporate governance stays in place. Thus, shareholders were in a sense voting directly for the performance of the Stada stock over the next years. That lead me to make the masochist quote.

So how many massochists were among Stada’s shareholders? Here are the results of the AGM:

Unfortunately too many. Shareholders voted for 6 members of the board (all shareholder representatives, but not the employee representatives). The only big success was the dismissal of Dr. Abend (dismissing a chairman rarely happens in a German company and feels like a victory for good corporate governance). Mr. Oetker stayed on the board. The main reason is that many funds (even AOC supporters) did not want to exchange the entire board as they wanted some continuity. AOC lost with their two other candidates. This was in large part due to a technicality (proxy voters were not able to vote for AOCs candidates because of the way the vote was designed). So Dr. Abend is out, but AOC was only able to take one place on the board.

So what do we make of these mixed results, where AOC gained more control, but not full control? I assume one of the following will happen: Either AOC and its supporters will gain more control over time and lead the company into a long term restructuring / buildup. AOC talked about 1bn in EBITDA as a 5 year target – this would likely result in a tripling of the stock. I am a bit skeptical about this targets but do agree that there is a lot of potential in the company. Another option is a takeover offer. I believe there are many interested buyers for Stada and hope the new board will allow a due diligence. In this case I think the upside is 20 to 30% within the next year. I prefer the latter to happen, but am fine with both results and keep my long position in the stock.

My friend and former workmate Yefei Lu just released a book called “Inside the Investments of Warren Buffett – Twenty Cases“. 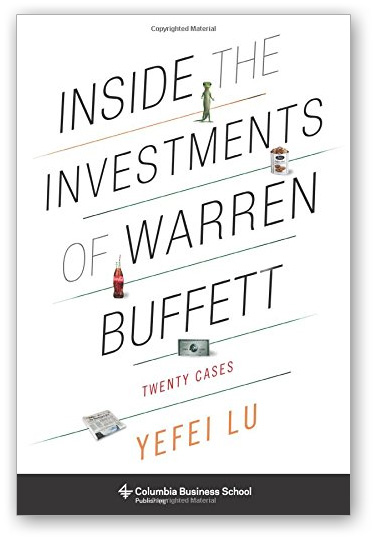 It was published by Columbia Business School and is available in bookstores now. The book takes 20 of Buffett’s most significant investments and analyses them from the perspective of an analyst, looking at the information available back at the time Buffett invested. While most books about Buffett are rather shallow and written for retail investors, this book goes deeper and offers some true value added. It took Yefei considerable time and effort to dig up all the letters, Moody’s manuals and Annual reports from 40+ years ago. I just started the book, but can already say it is a valuable addition for every serious investor who is interested in Buffett. On Amazon, you can have a quite extensive look into the book before purchasing it.

Watch this. These 6 minutes are all you’ll ever need to form an opinion about Trump:

Trump is openly lying. He displays his ignorance with pride and shows again and again that he basically knows nothing about the world. Yet the more he contradicts himself and the more absurd it gets, the more he is celebrated by his supporters.

The United States is a country of 320m people. It has some of the greatest universities in the world and no shortage of brilliant scientists, business men, thinkers, philosophers and philanthropists. Besides all of this, the best two candidates to run the entire country are apparently Hillary Clinton and Donald Trump. Let that sink in for a second: 320 mio people and the best they can come up with are those two.

Why is it that a somewhat dishonest, populistic person and a complete lunatic who you can’t trust with anything he says were selected to run for president? The sad truth is that the average voter simply does not value intellectual honesty and integrity very highly. People simply digest what mainstream media serves them, and mainstream media is not interested in intelligent disagreements and nuanced points. What sells are black or white thinking, shallow populism and scandals. I aggree with Ray Dalio that society’s inability to have an honest, thoughtful disaggreement is one of the biggest problems in the world, and it somehow seems to get worse.