Yesterday Judges Scientific held its AGM and warned the market about weak order intake. The stock tanked 25% but recovered to close at -15%. I had a call with the CEO yesterday evening and want to give you a quick update. Since I learned that critizism or negative information is best presented with the sandwich method, I will wrap the “meat of negativity” between two slices of “positive bread”:

Since posting my presentation in January, Judges made two and a half seemingly good deals:

The combined additional EBIT of those acquisitions is > 16% of current EBIT, so projected growth from cheap M&A is well on track.

Judges yesterday stated that it’s order intake after 20 weeks is still weak. As a result H1 results will most likely be negatively impacted – maybe the full year as well. This was pretty much all the statement said.

Last year, FY2015, also started weak but picked up after 10 weeks, so we are “10 weeks late” now. So should we panic? It is not a secret that Judges’ order intake can be erratic and we can always see a bad quarter or two. 2014 also saw weak order intake for several months until finally, in September order intake picked up. Judges ended FY2014 with a 3% organic decline. Maybe this year orders will pick up sooner, maybe later, maybe not at all. Neither me nor the company has any visibility.

Is there a company specific problem?
I dont think so. Competitor Spectris released a similar statement on the day of their AGM (last Friday) stating that sales in the first 4 months were down 4%, so they are also experiencing a weak market (Peers like Oxford Instruments or Halma have not yet reported anything for the start of this year). In addition have no reason to assume that anything is wrong with Judges’ businesses.

Is it structural, or just noise?
The answer is I don’t know, but assume it is a mix of both. On one hand I am not aware of any major negative change in government spending on a broader level in the last year. On the other hand we cannot ignore that organic sales growth has slowed down over the last years and we have now seen the third year in a row with a weak start.

I assume growth rates will be significantly lower than in the past, but have no reason to assume they are structurally negative – so I don’t see a reason to panic. However, I do take the risk of proplonged weak government spending very seriously and want to do another round of research on the development of university spending in Judges’ biggest markets. Unfortunately there is not too much good data available.

“The bottom bread”: Still high confidence in the management

David, CEO of Judges, was also in Omaha this year (together with his son and son in law – see picture below) so we had a chance to discuss the business while checking out the Berkshire exhibition. My confidence in the management is still high and Warren’s and Charlie’s example likely convinced David to go on for another 20 – 25 years ;-).

(I left out the picture where we were dressed as Heinz ketchup and mustard bottles, in order to not endanger anyone’s career)

If organic growth was gone for good and Judges would only grow by doing M&A, it would still not be expensive – but not a bargain either. However, for the moment I don’t have a reason to assume that. I’ll do some more research on government spending as soon as time permits.

The Best Ideas 2016 conference is today and I will be the first speaker in line (11:30 CET), presenting one of my most favourite ideas: Judges Scientific. 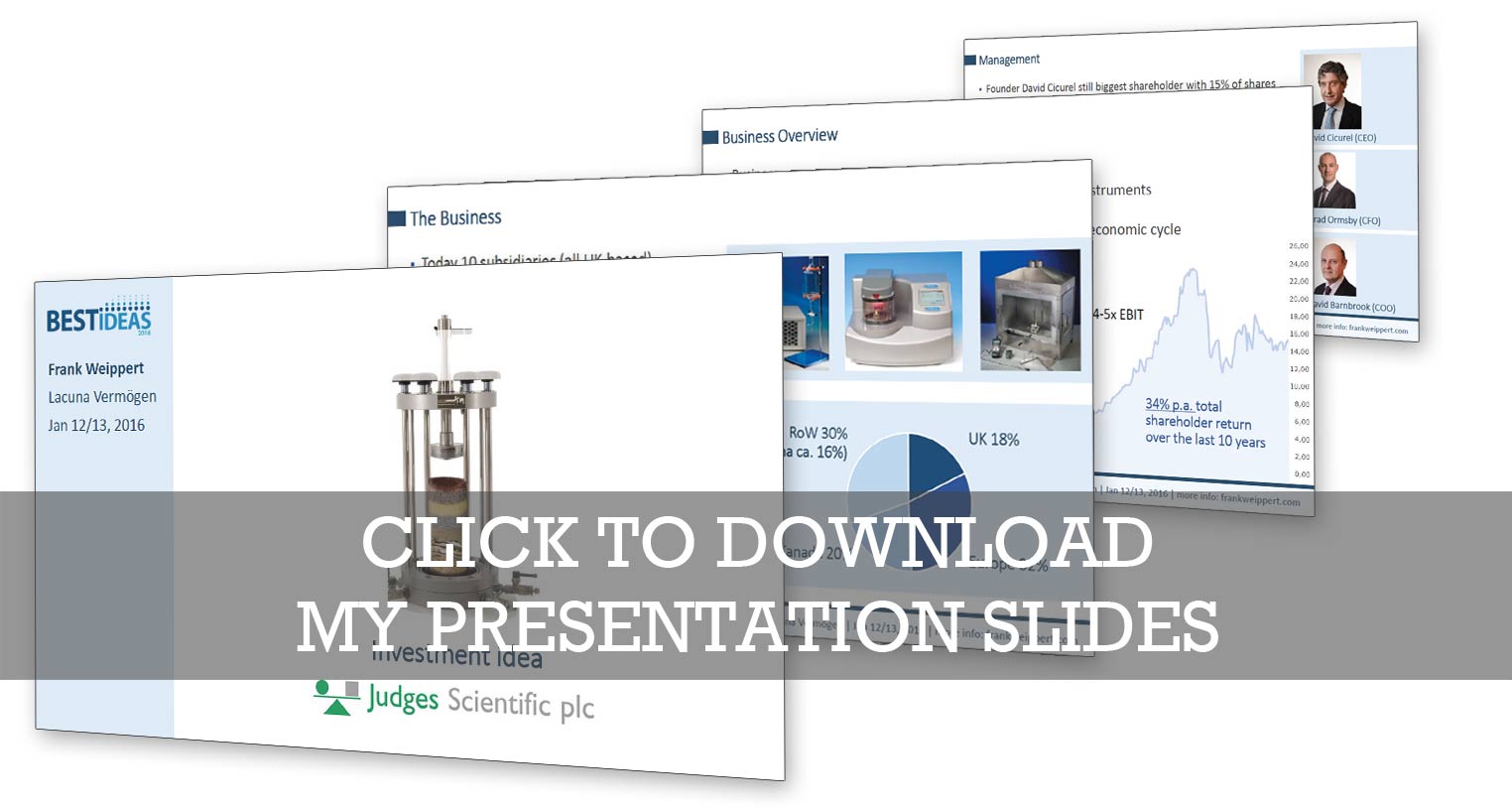 ValueConferences are the biggest fully online value investing conferences. They are organized by John Mihaljevic who is a friend from VALUEx. He also writes the “manual of ideas” in which he presents stock ideas and profiles managers. For investors who are looking for new ideas these online conferences are ideal as:

Judges Scientific is a London based acquirer of small niche market players that manufacture scientific instruments. The company fits into my “owner-run compounder” bucket and scores extremely well in both categories.

For details please watch the video.